Ernest Hemingway and his Hunt for German U-Boats

As famous for his outlandish behavior as he is for his timeless contribution to the canon of American literature, Ernest Hemingway wasn’t going to standby and do nothing as the German offensive threatened the USA during WW2.

In 1942, Hemingway was enlisted by the U.S. Navy and began taking his 38′ wooden fishing vessel, the Pilar, on seek and destroy missions for German Submarine.

A little know fact is that by this stage of the war several hundred U.S. ships had been sunk in the Caribbean, Gulf of Mexico, and off of the east coast.

Clearly, German submarines were becoming a very serious threat to the Atlantic seaboard of the United States.

Under pressure to keep losses to a minimum, the U.S. Navy desperately needed help and was open to all kinds of assistance, even that bordering on the edge of madness. 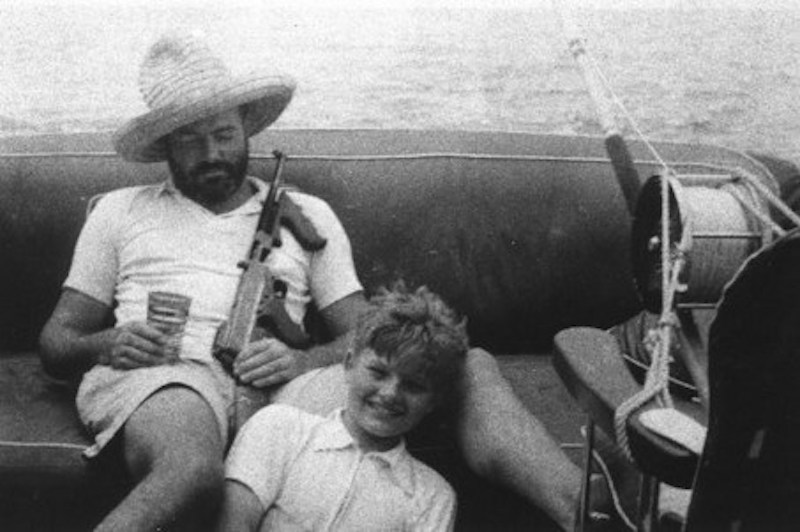 Aboard the Pilar in the early 1930’s, Hemingway holds his Thompson submachine gun and a glass. His son Jack (“Bumpy”) sits by his feet.

Call it a suicide mission, misplaced bravado, or an ultimate act of patriotism, Hemingway jumped at the chance to contribute to the war effort.

Gathering a band of companions, the author loaded his wooden boat with grenades, automatic weapons, limited electronic detecting devices of the time, and one would assume a healthy supply of whiskey.

Ernest made it very clear that if and when he came across a German submarine, not only would he call for backup, he planned on attacking the sub himself.

During WW2, Ernest Hemingway searched for German U-boats in the Caribbean

To facilitate this, a specially made bomb was designed for the Pilar.

Stored atop its flying bridge the coffin-shaped explosive had handles that would enable two strong men to toss it into the U-boat’s conning tower.

This of course would only be possible if the U-Boat had surfaced, and sufficient gunfire had mowed down any German crewmen placed on deck.

The odds were certainly against Hemingway and his crew. Not only was the conning tower hatch very narrow, if the explosive was to miss it would have ended up blowing fragments directly towards the Pilar. With the vessel being made of wood, the chances of survival would’ve been slim.

Luckily for Hemingway, (and his nautical companions), he didn’t have a chance to test the bomb as they never actually came across a German U-Boat.

Hemingway aboard the Pilar