OCFebruary 26, 2020Outdoors
OutdoorChief.com is a participant in the Amazon Services LLC Associates Program, an affiliate advertising program designed to provide a means for sites to earn advertising fees by advertising and linking to Amazon.com. As an Amazon Associate this site earns from qualifying purchases.

For many years people have enjoyed exciting recreational activities, including off-road driving and motorized journeying on untarmacked (and sometimes untracked) scenic terrains including semi-arid rocky areas and muddy savannahs.

One of the best vehicles for this type of off-road driving is the all-terrain vehicle (ATV). 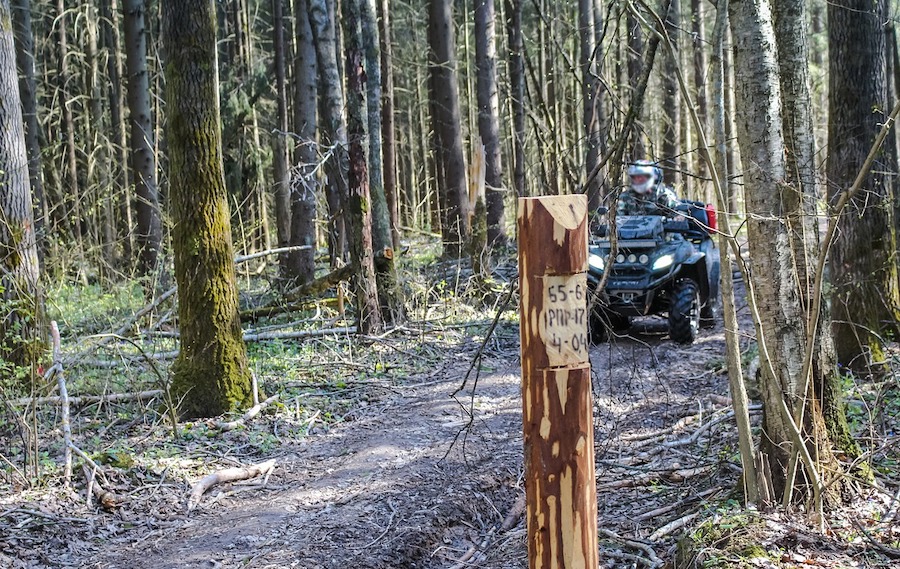 An ATV is a specially-designed vehicle that can travel on off-road (untarmacked or untracked) terrains on low-pressure tires while being driven by a single operator sitting on a straddle seat and steering the vehicle using handlebars.

Some ATVs called tandem ATVs can carry two people, the driver and a passenger.

Generally, ATVs are not street-legal in some Western Nations, including some US states. Depending on its build design, it can be called a quadricycle, quad bike, quad, three-wheeler, or four-wheeler.

Nonetheless, they share one operational design feature, the rider must sit on the ATV and operate it just like (s)he would operate a motorcycle. Sometimes, the wheels are replaced by tracks, for instance in the four-track ATV.

The most popular colloquial name is quad-bike, as it was first designed as a quadricycle with handle bars in 1893.

Later in the 1960s, a six-wheeled amphibious vehicle that was non-straddled was developed for military use, and it was the first special-purpose vehicle designated as an ATV.

In 1967, the first three-wheeled ATV called the Sperry-Rand Tricart debuted in the ATV market. It was a straddle-ridden ATV with a sit-in design (that is, the rider sat inside a seat).

In 1969, Honda improved this design and changed the seat design from sit-in to sit-on, while balloon tires replaced the mechanical suspension, and this ATV model was trademarked as an all-terrain cycle (ATC).

This poor suspension system limited the range of terrains that the ATC could travel in, and this led to the development of low-profile tires and full suspension in early 1980s.

These were featured, alongside racks, in the ATC200E Big Red made by Honda in 1982, which made this model a three-wheeled utility ATV that could traverse almost all terrains.

Apart from the utility ATV models, sport models were also developed by Honda which had gained monopoly due to exclusive rights to patents on engine placements and sport ATV designs.

The ATC-250R was a high-performance ATV that debuted in 1981, and went off production in 1986. It paired an air-cooled two-stroke engine – whose displacement capacity was 248 cubic-centimeters (cc, or 0.248Liters[L]) – with a five-speed transmission system.

The contemporaneous high-performance sports model, ATC-200X, had an 18horsepower[hp] (equivalent to 13.4kilowatts[kW]) four-stroke engine with a displacement capacity of 0.192L or 192cc; and featured single piston calipers and rear disc brakes.

An improved design, the ATC-350X entered the market in 1985, and featured a 26hp, four-stroke 350cc engine with four valves, and was cooled by air and circulating oil. Its braking power was enhanced by the dual piston-brake calipers. 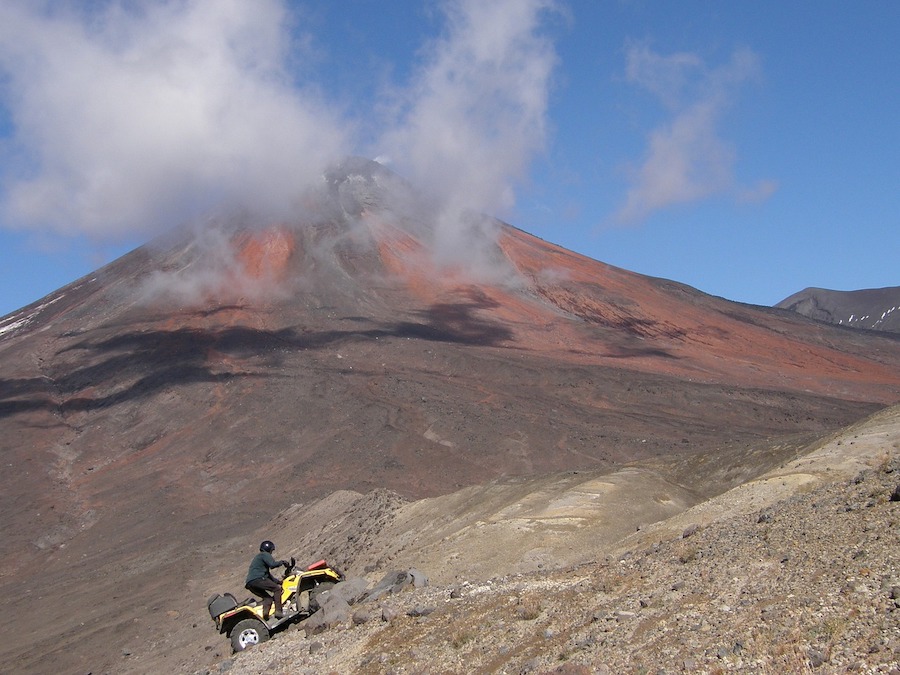 To date, the ATC-350X is considered the standard of measure for ATV torque power. Even so, the ATX-350X had an underbuilt chassis that inconvenienced handling, unless a customized gusset kit was fitted.

At the same time, the ATX-200X was completely redesigned and fitted with a 0.199L four-stroke engine, sportier aesthetics, and its suspension system supported a longer suspension travel, while its reinforced box frame featured squared tubing.

Another model that was completely redesigned was the ATC-250R that was refitted with a 246cc, liquid-cooled two-stroke engine with a torque of 38hp. These engine features and sporty aesthetics have made the ATC-250R valuable to three-wheeler enthusiasts across generations.

In fact, it has been more popular than the four-wheeled Yamaha Tri-Z YTZ250 and Kawasaki Tecate KXT250 models.

The three-wheeled ATV renown for being fast is the Tiger 500 ATV – an American-made model that was powered by a two-stroke Rotax engine.

Even so, three-wheelers were considered unsafe due to their instability at high speeds, as they would wobble much to the point of causing the ATV to topple over.

This was more noticeable in ATVs for kids and teenagers, which caused so many avoidable trauma cases that compelled the American Academy of Pediatricians (AAP) to call for their ban.

Comparatively, four-wheelers were more stable, and from 1987, they were produced in preference to three-wheelers. This is despite a safety study done by the Consumer Product Safety Commission (CPSC) allowing for three-wheelers to be registered and insured. 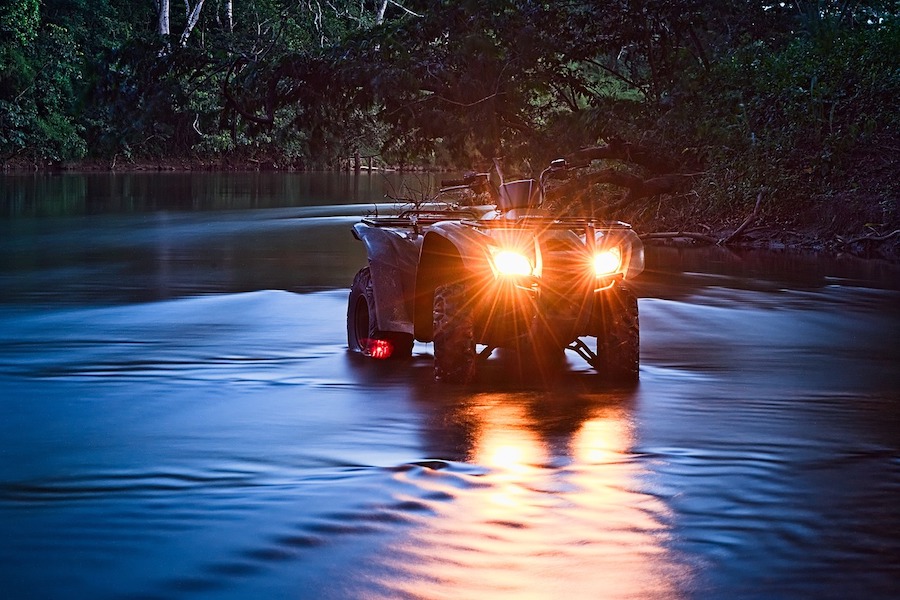 Even so, the three-wheeler suffers a major disadvantage due to their sole front wheel, and this is related to shifts in its center of gravity (CoG).

This occurs when climbing hills when its CoG shifts rearwards to the two rear wheels hence making the ATV prone to flipping backwards; or when riding down steep inclines as the ATV is also prone to rollovers.

For this reason, three-wheelers are recommended for experts who have mastered riding techniques and have worn their safety gear properly, while four-wheelers can be used by practically anybody, including kids.

The first four-wheeler was the QuadRunner LT125 which was made by Suzuki in 1982. This was followed by more compact models, known as mini-ATVs, specifically, the LT50 model.

The LT80 model featured continuously variable transmission (CVT) – a type of shiftless automatic transmission. In 1985, the Suzuki LT250R QuadRacer was introduced as a high-performance four-wheeled ATV with a two-stroke liquid cooled engine, a sophisticated long-travel suspension, and a manual transmission system.

It was later surpassed in 1986 by two models, the FourTrax TRX250R made by Honda, and Kawasaki Tecate-4 250. A year later, the Banshee 350 made by Yamaha Motor Company entered the market as an ATV suitable for sand dune riding.

From then on, there has been an exponential improvement in design complexity, engine power, speed, and aesthetics of four-wheel ATVs.

This phase was initiated by the Suzuki LT500R QuadRacer which was nicknamed the Quadzilla due to its relatively large size and high-speed. It was then followed by the Honda FourTrax TRX350 which was a four-wheel drive.

Modern ATVs can be categorized into two; sports ATV and utility ATV. A sports ATV is compact, lightweight, and designed for quick acceleration and high-speed performance.

It has a low CoG as compared to the utility ATV which is a special-purpose vehicle for hauling small loads, or towing small dump beds or small trailers.

There is also the ATV designed for youths; however for more on that, head here.