OCMarch 26, 2019FeaturedThe Blue
OutdoorChief.com is a participant in the Amazon Services LLC Associates Program, an affiliate advertising program designed to provide a means for sites to earn advertising fees by advertising and linking to Amazon.com. As an Amazon Associate this site earns from qualifying purchases.

While diving in the Seychelles, off the Great Barrier Reef and in the Red Sea are popular destinations to experience the wonders of Scuba Diving; once you become a little more accomplished and the dive hours have been gained, it is very natural to want to head to an area a little less known.

In the spirit of that, we have come up with 10 secret diving spots that should be added to your bucket list. Get ready for a few surprises. 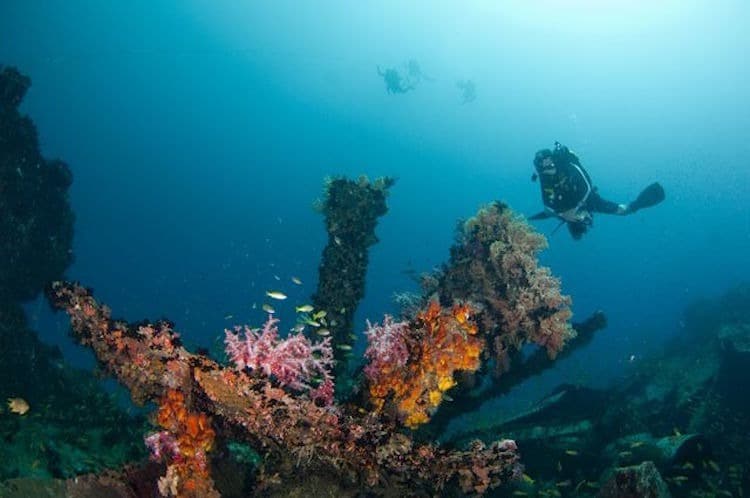 Malaysia is an all too often neglected area for scuba diving. Which is strange considering how affordable it all is down there.

If you end up heading to this part of the world with diving forming part of the itinerary, make sure you head to what is called, ‘The Rice Bowl Wreck.’ This open ocean wreck dive site is situated in Malaysias state of Sabah.

The wreck, (which can be reached from Kota Kinabalu) is definitely not for beginners. However, it is a real beauty. Bathed in clear waters, the superstructure is open in a number of places for careful penetration, (assuming you have the relevant certifications).

Colourful coral and marine life cover the length of the wreck making for a truly wonderous diving experience.

And if you’re wondering how it became to be known as ‘The Rice Bowl’? It’s because the divers that first discovered the wreck, found hundreds of rice bowls in the bow. 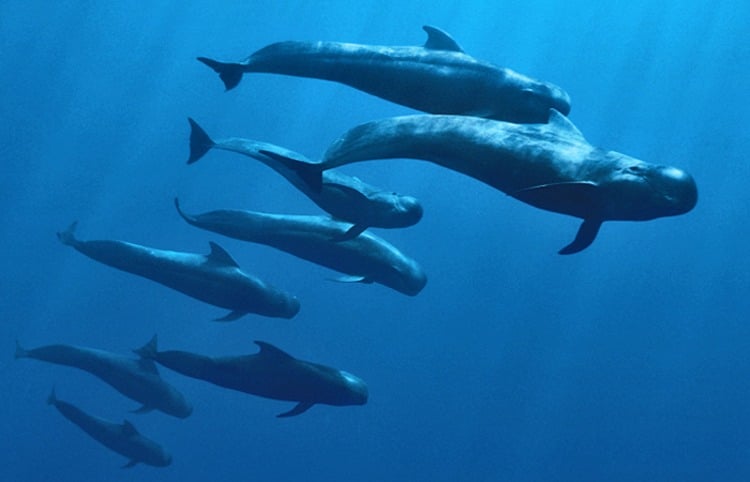 If you’re willing to go completely off the radar in pursuit of an incredible dive site, then a pot ten miles off the coast of Faial Island, in the remote Azores Archipelago maybe the destination for you.

Here you will find one of the world’s best locations for diving with blue whales.

Again this is a diving experience for those with sufficient experience. The Atlantic seabed is approximately 1000 feet below you, and there is no reef to use as a reference point.

You are well and truly in the blue.

However, the trip and the preparation are worth it. Once you first sight one of natures most graceful predators gliding towards you from the darkness it is both awe-inspiring and rather frightening in equal measures.

A must experience for any serious diver.

A River in Rio Sucuri

If you happen to be travelling through Bonito, south of the Pantanal in Brazil’s state of Mato Grosso do Sul, you should spare time to check out Rio Sucuri.

Here you will find a Byzantine network of rivers and springs with crystal clear waters ripe for snorkelling and scuba diving.

The diving is nice and easy here too, so perfect for someone wanting to get in the water with little experience. There are a number of entry points along the bank. Just slide into the river and float with the current along the shallow bed.

There’s plenty enough to see as well. The variety of fishes and colorful subaquatic vegetation, make for a delightful yet very relaxing dive site.

From the rivers of Brazil, to the highlands of Scotland – we did tell you these would be dive sites you’ve never heard of.

One wouldn’t think that Scotland would have a great deal to offer when it comes to Scuba diving, however you would be very wrong.

Conservation Bay in Loch Carron, northwest Scotland really has a lot to offer. With 18-foot tides gracing the area, large volumes of sea-water rush in and out of the loch.

The main dive site is close to the narrow neck that feeds the lock and contains all manner of marine life and crustacean activity as well as carpets of soft coral.

This is a dive site where tide makes a difference however, so make sure you plan your times before you arrive.

Head to the Sinker 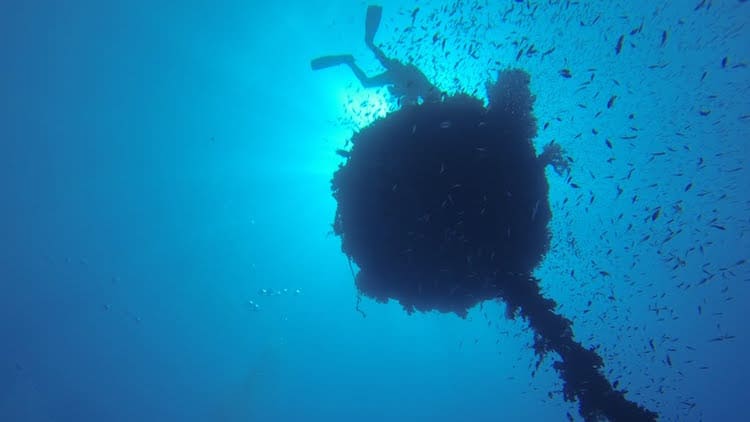 While the red sea is clearly a popular holiday diving destination, there are still more remote areas to be found along this beautiful coastline.

One such spot is a dive site known as the Sinker, not far from the Egyptian town of Nuweiba.

The site came to be from a manmade error. 80 feet of weighted mooring line was thrown into 110 feet of water. The result is a spectacular ecosystem of new marine life and coral splendour.

The mooring buoy itself is now covered with vivid orange, red and pink soft corals. Eerily suspended in the depths, the buoy is like an elaborate flower basket with a line attached to the seabed.

A trip to Far Side 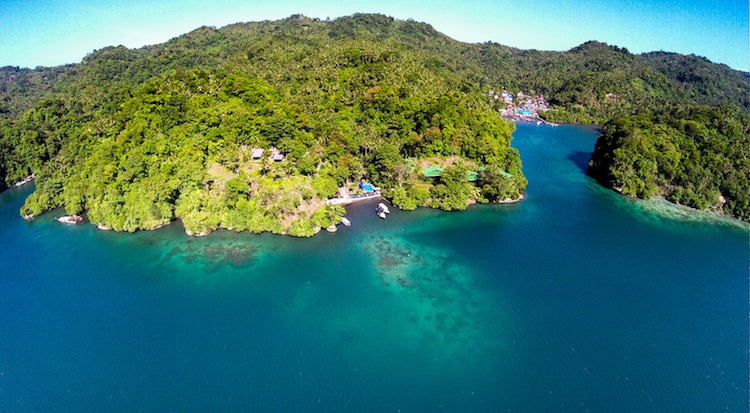 Although muck-diving may not be your cup of tea, I am very much a purveyor of the fact you should always try something once.

So if you do find yourself in the Lembeh Strait indulging in this rather unique pastime along the volcanic-sand slopes, it is worth knowing that over on the eastern (far side) of the island there are some very lovely dive sites to explore.

Only very few divers head here, which makes for an even greater surprise when the gorgeous coral formations and clear waters are witnessed by those that do.

The remoteness is exacerbated by the fact the area is a long boat ride for most land-based dive operators.

Well worth checking out if you can. 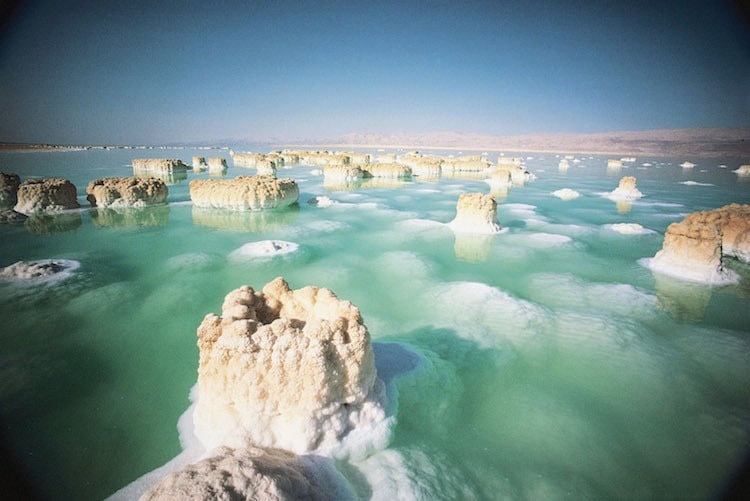 It is common knowledge that the dead see is packed full of salt. However, what a lot of people don’t know is that the ‘sea’ is actually 1,000 feet below sea level, making it the deepest lake in the world.

Situated between Israel, Jordan and the West Bank, the heat here is so intense that the lake loses a lot of water, (more than three feet per year in fact).

And while you can’t hope to see a great deal when diving the Dead Sea, theirs is the kudos factor which comes from saying you have gone under in such a strange environment.

You do need a full-frame mask and lots of weights to make it happen however.

Swimming the Dead Sea is a lot less hassle and more than worthwhile too. However, lots of people have done that. 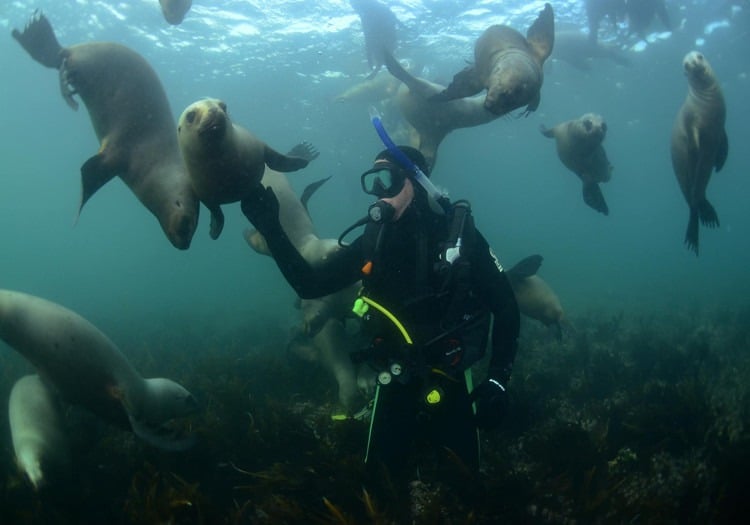 Very few people have dived along the coast of the Valdes Peninsula, in Argentina. For the intrepid that are lucky enough to end up anywhere near the Golfo Nuevo, (while also having their diving equipment with them), a diving experience alongside the endangered southern right whales, becomes an option.

You will need to secure an expensive permit first however. The area is a whaling sanctuary and World Heritage Site.

Once in the water you will have the chance to see one of Mother Nature’s grandest marine animals. With their numbers in constant decline, you may be one of the last generation of humans to be able to do so. 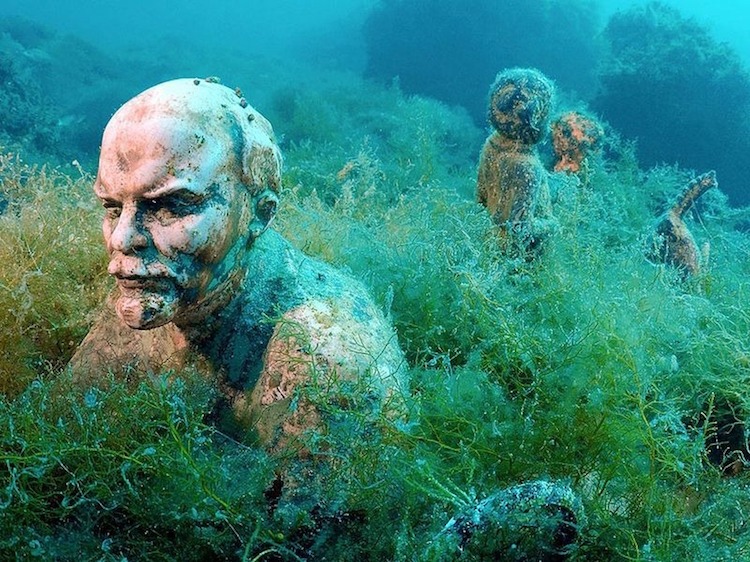 This particular dive site is eerily special. Leaders’ Alley off Tarkhankut Cape is an area just of Ukraine’s Crimean peninsula.

Again, the frequency of divers is low. You head here you will not have a local dive school to hold your hand.

What you will find under the water though is well worth the trip. Out of the darkness and between the swaying algae you will see the faces of Soviet rulers past.

After the fall of the Iron Curtain and the breakup of the USSR, the thousands of statues and busts that adorned public squares and buildings throughout the empire, were ripped from their bases and sent to the landfills.

However, in the 25 years since, some of these busts have ended up here. So why not go diving with the face of the great revolutionary Vladimir Ilyich Lenin, peering at you from the depths.

You will also find high-tech installations, toys and other deep-sea folk art, in what is arguably one of the strangest dive sites in the world. 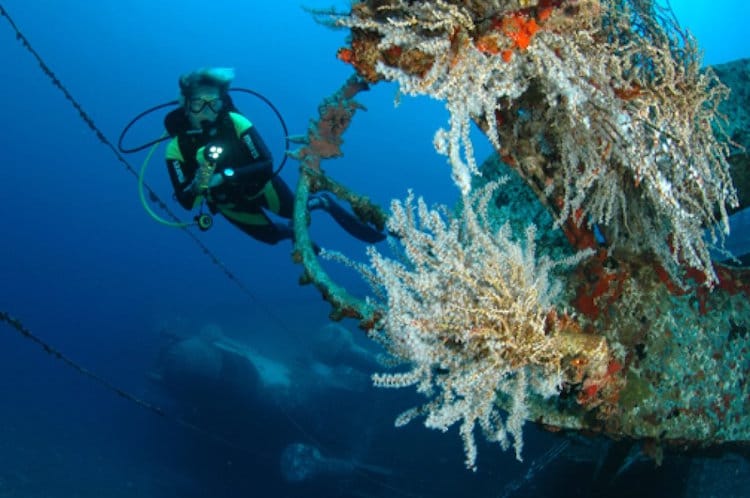 One of the largest wrecks in the Caribbean is the Charles L. Brown, a former cable layer, purpose-sunk vessel situated off Sint Eustatius or “Statia”. This beast of a boat lies on its side at a depth between 50 to 100 feet deep.

What makes the site particularly remarkable, (apart from how few people go there) is that the water is so clear it is actually possible to see the whole vessel from one vantage point.

Its isolation has also made it a good home to a large diversity of life. If you enjoy wreck diving, this dive location has to be on your list.